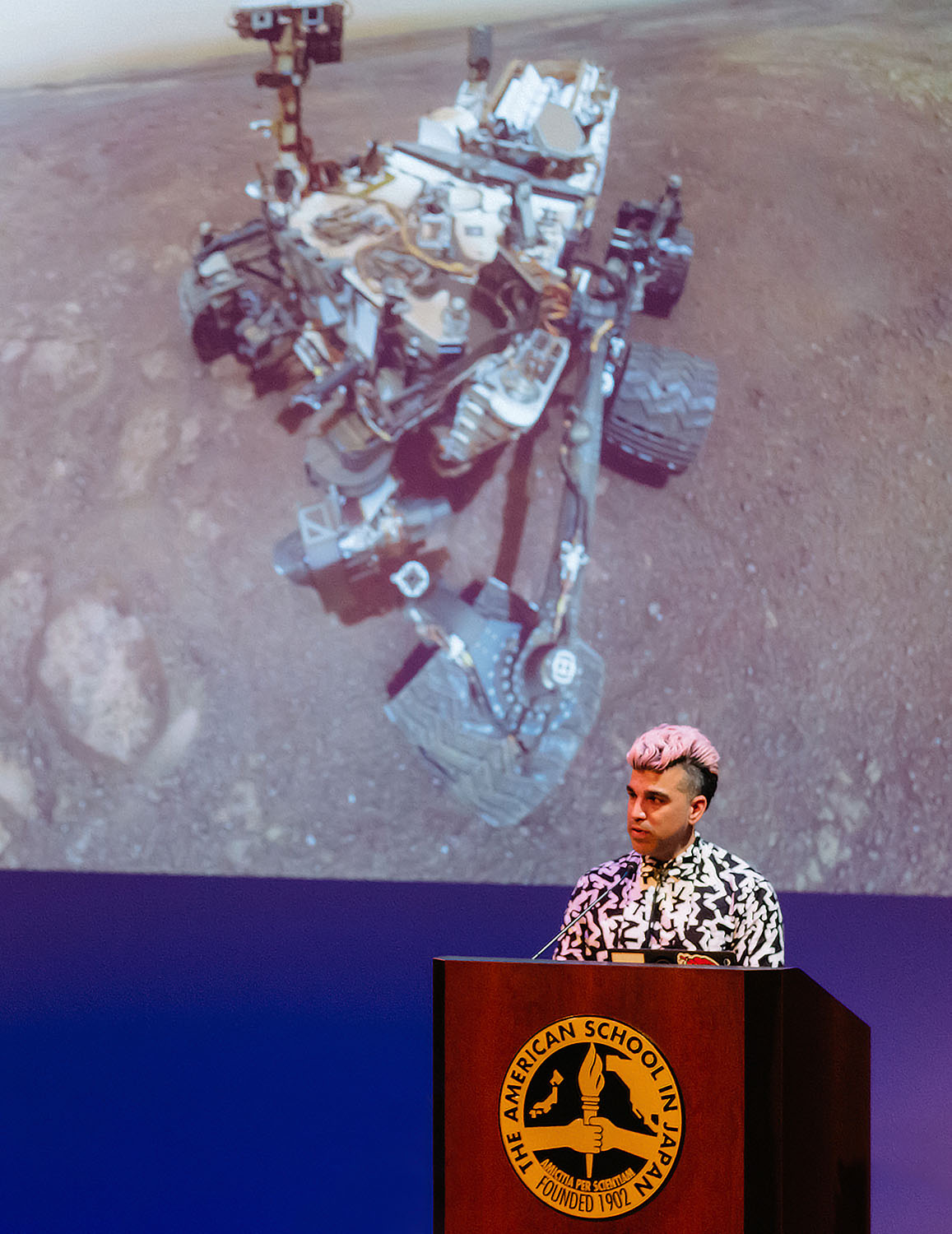 “Why do we exist? Why is earth so full of life? A lot of the work that we do at NASA and the work in particular that I'm working on now is to help us understand what's going on in our own planet.” This is what drives Bobak Ferdowsi ’97 in his work at NASA’s Jet Propulsion Lab as a systems engineer. Ferdowsi, who spoke at ASIJ’s Space Conference in May 2019, was just 24 when he first started working on NASA’sCuriosity Rover mission to Mars. Nine years later, the rover successfully landed on the Red Planet. For Ferdowsi, the beauty of his work lies in its potential to “help humanity create solutions that address the problems and the challenges of our times.” Ferdowsi finds that space exploration puts things into perspective: “it helps us realize that there is so much more between shared between us than there are differences.”

Though Ferdowsi now sees his purpose clearly, he didn’t grow up aiming to be an engineer. At most, his interest in space consisted of a fascination for science fiction. “I grew upon science fiction,” he says. “It planted a couple of seeds.”It was only in high school that Ferdowsi became seriously interested in science, inspired by his chemistry teacher,Mr Chambers (FF ’89–11. By conveying his excitement and interest in science, Chambers showed Ferdowsi that “this is something that is worth being excited about.”

Ultimately, Ferdowsi realized that “science was a place that I really want to pursue”, though the road ahead would still have twists and turns. Initially majoring in physics, Ferdowsi soon realized that this wasn’t quite right for him.

Despite having “experimentally made a mistake,” Ferdowsi highlights what he learned from it: “What I did enjoy from that experience was I really liked trying to figure out how to solve a problem, building up some hardware to then address that issue.” This, alongside a recent successfulNASA rover mission to Mars, led him to go into aerospace engineering, where his trial and error approach to life would continue to serve him.

Ever since his bicycling accidents as a child, from which he learned to inflate his tires and wear a helmet, Ferdowsi has seen failure as a learning experience. “There will always be failures, but how we address those and how we learn from them is really how we keep getting better and better a tour jobs or our lives.” In high-risk environments like NASA, it becomes especially important to learn from failure. The question, Ferdowsi states, is “How do you make mistakes on Earth before you launch people into space. How can I fail when it doesn't cost me something, versus fail when something important is on the line?” As an engineer, failure represents a crucial part of Ferdowsi’s job. He admits that testing failure on earth and adapting to failure in space are his favorite parts of the project. “It's this awesome opportunity to play detective.”

Ferdowsi has now played “detective” on multiple NASA missions. He previously worked on the Curiosity Rover mission, which aimed to determine whether there is or has been life on Mars. It was a groundbreaking mission, using new techniques and processes for landing and holding avast array of scientific instruments designed to probe the Red Planet. Now, he’s preparing for another launch, currently“finishing the design, where we're building hardware, where we're delivering software,” in preparation for the goal of launching in January 2022. In parallel, his team is also working with India, “delivering the spacecraft hardware to India and integrating with the Indian spacecraft.”

Though Ferdowsi tends to prefer the hands-on testing to the mission-planning discussions and spacecraft design process, every step is important. He highlights that this is why a variety of individuals with differing strengths and interests is a necessity at NASA. From lawyers to artists, and accountants to storytellers, there are many professions within the team: “I think all of that comes together,” he says.The collaboration between all the moving parts “makes the whole thing work very well.” Ferdowsi believes “we’ve sort of moved past the point of where you’re going to have that lone, great scientist or engineer,” and that “the next generation of discoveries and advances are going to come as a result of people working together.” When working with many individuals, “the ability to understand different perspectives and to bring different perspectives to the table is extremely valuable.” Ferdowsi gives the example of the discussion between scientists and engineers between the desire to conduct as many experiments as possible“versus what’s safe for the spacecraft from an engineering perspective.” “Consensus-building”, as he calls it, is vital on all levels in order to integrate multiple points of view into a single solution that works for everyone.

Having this open mindset and ability to navigate different viewpoints is becoming increasingly important as the space community moves “towards more international collaboration,”Ferdowsi notes that his current project in collaboration withIndia was fulfilling and “a very, very different experience than working just within NASA.” He believes that his time at ASIJ helped foster his multiculturalist and collaborative mindset. He notes that learning in the ASIJ environment, where there are many perspectives and beliefs, challenged him to understand others’ frameworks: “I think you learn to consensus-build naturally here at ASIJ.”

Now Ferdowsi is giving back to his community. In May of2019, Ferdowsi returned to ASIJ to speak at the second annualSpace Conference. Organized by the students of the HighSchool Space Club, the conference had many ASIJ students, parents and faculty in attendance, as well as students from several other schools. This Space Conference was generously funded by current parent Ted Tawara and the PTA, which sponsored Ferdowsi’s visit to ASIJ. Sakiko Miyazaki ’20, head leader of the Space Club and organization team for the conference, says that “as the Space Club, our mission is to spread our passion for space exploration throughout the community. With the Space Club Conference, we aim to show students the boundless opportunities space holds.”

Ferdowsi spoke on the importance of a positive mindset towards failure, encouraging students to follow their interests and not be deterred by failure. “It was so inspirational to see a former ASIJ student’s journey in pursuing his passion for space,” says Miyazaki. Just like Mr Chamber’s approach to science inspired Ferdowsi, perhaps one of the members in the audience has been in turn inspired by Ferdowsi’s passion. A new wave of future change-makers and space explorers is on its way.