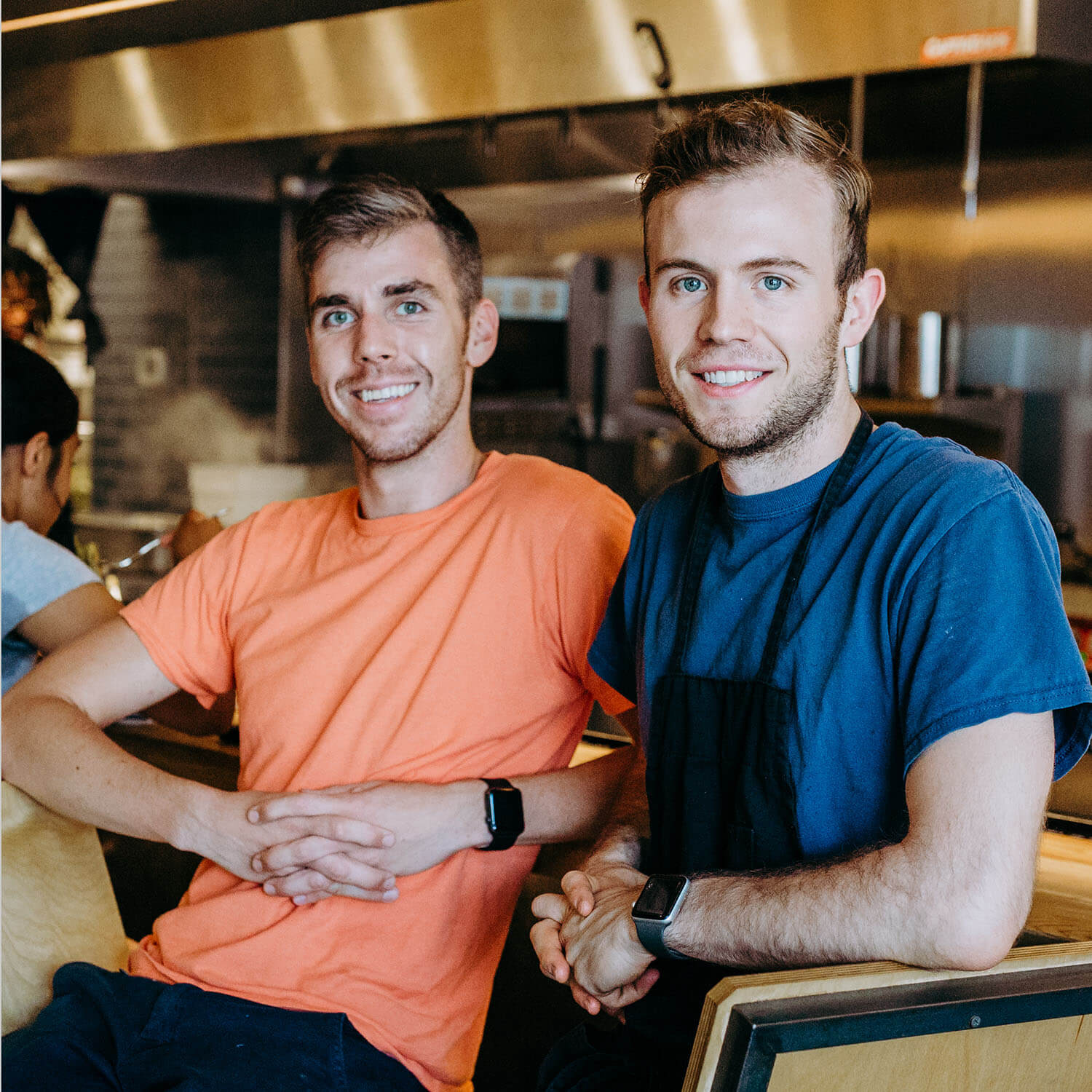 The rich scent of long-stewed broth and fried gyoza drift heavily street-side, through restaurant ventilation and the door as occasional customers step inside, led astray from their path by the tempting smell and cozy, warmly-lit interior. It’s late, and the surprisingly busy streets are full of hungry people. The picturesque storefront contrasts the surrounding night, the ramen shop is an oasis. It’s a common Tokyo scene—one that would invoke natsukashii memories for any person who has spent an evening downtown—but this shop is in Baltimore.

David Forster's ’10 ramen success story is a savory one. Aspirations to change the Baltimore restaurant scene began during his time studying applied mathematics at John Hopkins University. He describes the experience as similar to that of anyone who graduates from high school—ASIJ especially, with its proximity to one of the world's largest metropolises—“you quickly realize that the food around any college in America is pretty lacking...And so, I missed the food that I ate in high school.” He found that many of his former classmates shared the same experience and frustrations at their universities. “But on the East Coast, New York started to see a lot of ramen shops opening up and then DC had a big ramen boom and I just thought that a ramen shop near Hopkins would do really well.” David graduated Hopkins and, declining a job offer at Microsoft where he interned the summer of his junior year, moved in with his parents in New York. “I knew that when I graduated I wanted to pursue a ramen shop concept.”

Standing at 1,591-square-feet, PekoPeko is a very modest size by US standards and, despite the sub-75 seat footprint, does 200 covers or more on a normal night. Customers are drawn by the lit sign, a beacon in the dark, branded with an owl perched upon chopsticks. The seemingly odd name has many intrigued and offers David opportunities to provide some cultural insight, “the giongo Japanese I think are a really unique and fun piece of the language.” He explains that peko peko is an onomatopoeia used to describe the sound of hunger. Astute customers will notice additional giongo sprinkled around the restaurant. And the owl is a direct connection to both the restaurant and the nocturnal creature’s late hours. “One thing that I felt was important was engaging a later night crowd. Most ramen shops in Japan are open well past midnight, getting commuters off the last train.” The majority of Baltimore restaurants close at 9 or 10pm, it's a quiet city past 11, but PekoPeko is open until midnight with aspirations for even later hours.

Ginger, chicken, kombu and water all meet and mix in a pot—a simple but delicate balance of just four ingredients simmered for several hours under the watchful eye, and occasional taste-test, of a seasoned chef.

PekoPeko Ramen is somewhat unique state-side. While most ramen shops in the United States prefer to use a pork-based stock, a common choice in Japan as well, PekoPeko makes a chicken-based soup, exclusively. In an interview with a Johns Hopkins reporter, David explains, “There’s two schools of ramen—pork and chicken. Maybe a third of ‘other.’’’ The chicken-based stock accomplishes a somewhat lighter dish that David likes to refer to as “everyday ramen.” That, however, is not at the detriment to depth of flavor. Although PekoPeko’s ramen stock is comprised of four simple ingredients—chicken bones, ginger, kombu and water—the portions and process are carefully considered. David says the kombu is especially important in creating that perfect umami—the “fifth flavor” identified by a Japanese scientist describing savory, full or meaty taste profiles. That umami, chicken stock-based bowl of ramen is also a common choice in Japan and is a flavor to which David has tried to remain faithful since leaving university and the prospects for certain employment.

Thick, umber-hued shoyu tare—a concentrated soy-sauce base—cascades from a small ladle. It tints the bottom of a large, familiar, white ceramic bowl and breaks the fall of the following emerald scallions. The chef carefully incorporates the house-made chicken stock, encouraging the onions to mingle.

The true start to David’s story began in 1999, when his family first moved to Japan. David attended ASIJ from the middle of first grade, all the way through graduation in 2010. Entering high school in Tokyo and earning more freedom, David and his friends became quite familiar with that nostalgic Tokyo scene of a quaint ramen shop, and the taste of traditional Japanese comfort food. “I ate really well growing up and obviously Japan and Tokyo afford everyone a really great breadth of culinary experiences.” He reminisces on his high school days, “at ASIJ on nights out or before going home or after a basketball game...I just had so many memories, good memories associated with ramen.” When asked about his favorite ramen joint, he stumbles. It’s difficult to pick just one. He fondly remembers Afuri, which saw its start in Ebisu and shares the same penchant for chicken stock as PekoPeko. It’s only a coincidence that the owner is brother to Chef Nakamura. He continues, recommending Ichiran for pork broth ramen and, for a miso base, Gogyo in Nishiazabu, demonstrating a depth of passion cultivated over the course of years. “I like the meals that I shared with friends—I think ramen definitely was the type of food that we ate the most as a group of friends. And so I think for that reason I wanted to do a ramen shop.”

Of course, David did not sustain himself only on a diet of Japanese comfort foods. When asked if he had any culinary experience to back the head-first dive into the competitive restaurant industry, he happily replies, “not really.” Elaborating, David identifies potential roots to his passion, “I think, if you grow up in Japan, food is part of the culture. You have some of the best French food and Italian food in Tokyo and in Japan. So, at least from the dining side or the eating side of things I feel really blessed to have grown up in Japan just because the food is so outstanding.” Beyond the inspiration, David hoped that someone would take a gamble on a college educated kid who decided they wanted to work in a kitchen, saying “it sort of worked out.”

The chef coaxes golden chukamen, perfectly cooked wheat noodles, into the near-boiling broth with a pair of chopsticks. They begin to absorb the stock-and-tare concoction as the chef prepares toppings of extra-soft boiled egg, bean sprouts, spinach and charred chashu pork—each laid thoughtfully atop.

Although David had a hand in the opening of two ramen restaurants in New York, he faced a number of unexpected challenges in establishing and growing PekoPeko. He revealed to The Johns Hopkins News-Letter that, as a first- time restaurateur, simply obtaining a lease near campus required extra effort, “having been a student here, I had become familiar with a number of the staff at Hopkins. It was helpful for me that they knew me so that they could tell the landlord that I’m a legitimate contender.” Continuing the trend of unforeseen roadblocks that first-time restaurant owners often face, David reflects on the greatest obstacle he had to overcome, explaining, “Definitely the most challenging was the emotional stress of staffing.” While prepared for the more apparent difficulties in the road ahead, such as the long hours of a new restaurant owner, David brushes off many of the other stresses, saying “I'm only 26.” He continues, “what is a big stress is not being confident that your staff are going to show up everyday on time...The emotional stress of people not really holding their own is super challenging and something that I wasn't as prepared for.”

Such challenges scaled as David grew PekoPeko, expanding hours and menu items, so he quickly learned to address those past difficulties directly, hiring more people for leadership positions, learning to delegate responsibility and taking special care to ensure that those he hires are capable of maintaining the quality of ramen he would expect of himself. “So now I'm very careful about how we grow because I don't want a problem that we hadn't fully recognized or appreciated to be detrimental to the quality of the food or the experience for the guests.”

Somewhat surprisingly, however, David easily sourced all of the necessary ingredients—even some of the more traditionally Japanese items, such as kombu and katsuobushi, thin fish flakes, that many may assume are hard to find in Baltimore. “I would say that it's definitely more challenging to get that type of product as a normal consumer, but from a restaurant perspective if you have an account with certain vendor the Japanese products are not as challenging to get.”
‍

Since opening, David has also had his eye on some particular sake, Japanese beer and wine, to complement and complete his menu—alcohol, after all, is something no authentic Tokyo ramen bar would do without. Liquor license laws proved another hurdle, the Baltimore Business Journal explains that’s because “PekoPeko's small space doesn't provide enough room for the 75 seats required to request a new liquor license in Baltimore City.”After nearly two years, David has only recently, in October, found a solution with the city approving PekoPeko to take over an old license from a recently closed pub. Though, David did have a novel solution for thirsty guests, from opening day and until their new offerings go into effect, he encourages customers to bring their own beer, an uncommon and often unspoken taboo in the restaurant world. He looks forward to that final step towards authenticity, though, stating “we're a Japanese restaurant with no Japanese sake or beer offerings, so I think it's a value-add experience for our guests."

The chef puts the finishing touches on the steaming bowl of classic torigara shoyu ramen—PekoPeko’s best seller. A slice of akadaikon radish adds a contrasting rose color. The aroma has the customer eager to sit down and immediately dig into the hot noodle dish, foregoing the cultural faux pas of waiting.

When it comes time to pay, no PekoPeko customer digs for dollars. David may be ahead of the times, but PekoPeko is completely cashless. Both David and Andrew say that it’s a smart choice from a business perspective, “you have to pay someone to count the cash, you have to pay someone to reset your till, you have to pay cash hauler or you have to pay someone to go to the bank to deposit the cash and you have to worry about theft—problems go on and on.” Their own market research shows that with only 7% percent of their potential transactions being cash-based, the margin that credit card processing takes becomes irrelevant. “We thought that it would be much much easier to just take out that whole logistical problem.” Customers will also find that, just like in Japan, tips are unacceptable as they are factored into the cost of each dish.
When customers sit down with their ramen—only a few minutes from order to table—David encourages them to eat it in typical Japanese fashion—right away and slurping loudly. “As you slurp the noodles up, it helps cool them off.” He also notes that aerating the noodles activates the olfactory sense and brings out more flavor in the ramen. It is also, simply, satisfying.

With PekoPeko, David wants to share not just Japanese food culture, but the memories and nostalgia he has for those Tokyo nights, with his friends at the local ramen bar saying, “ramen is more than just a bowl of noodles. It’s a centerpiece for the kind of friendships, inside jokes and late nights you’ll remember forever. We hope PekoPeko is a space for your own ramen memories.”