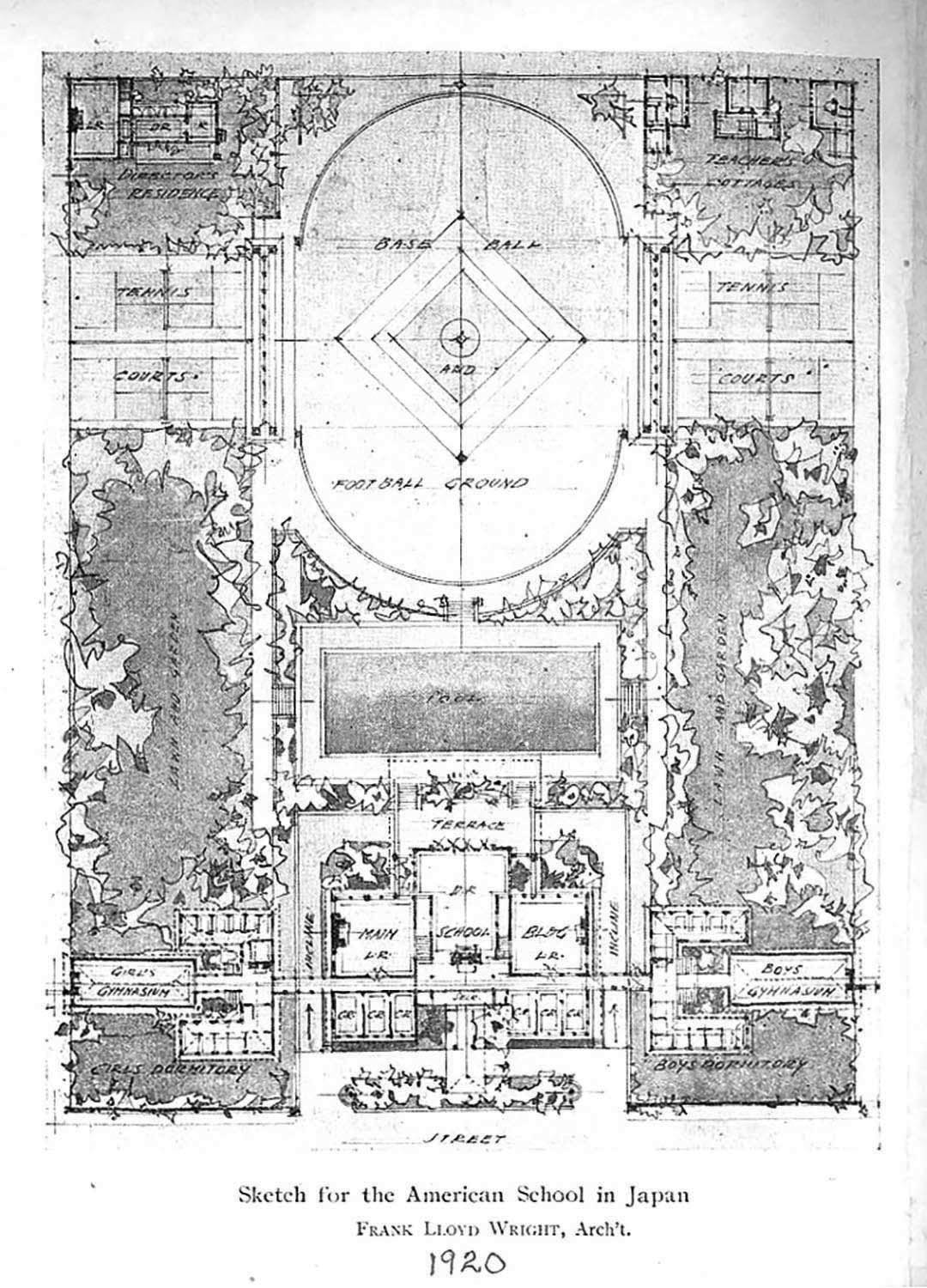 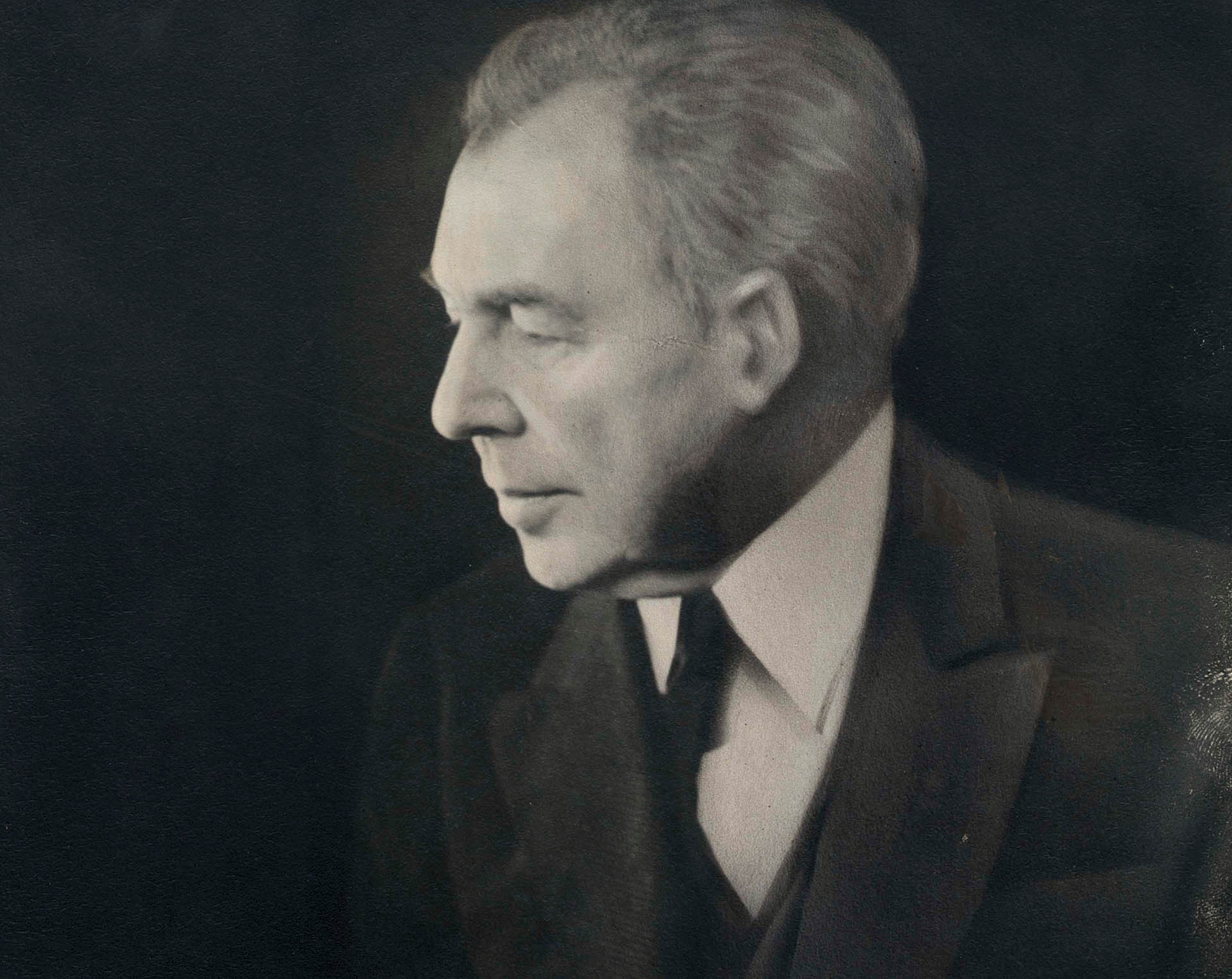 Frank Lloyd Wright and The American School in Japan

America’s greatest 20th-century architect, Frank Lloyd Wright, made his first trip to Japan in 1905, drawn by his passion for ukiyo-e prints, and declared it to be the “most romantic, most beautiful” country on earth. Under its spell, he endured repeated trans-Pacific crossings, first in search of prints and later, in search of refuge. In 1914, when Wright faced personal tragedy and public condemnation at home, Japan intervened with a commission that would eventually allow him to transcend his anguish and redeem his career: the Imperial Hotel. It would take six tumultuous years to complete and remain, as the many decades of his career passed, Wright’s largest and most complex design.

When he sailed away from Japan forever in 1922, Wright left behind one masterpiece, at least a dozen other designs, and another, equally significant, legacy: his transformative effect on the men who had shared his struggle, many of whom went on to build their own masterpieces, to alter Japan’s cityscapes and mentor a new generation of architects. Against the backdrop of the most turbulent century in history, Wright had built not just a hotel, but an enduring bridge that spanned two great nations, two great cultures—and helped unite them in a shared future.

But the extraordinary Imperial Hotel always overshadowed all else, surviving the Great Kanto Earthquake in 1923, thrusting the architect back into the limelight, and helping to keep him firmly on the world stage. In the end, Japan was the only nation outside of America in which Wright lived and worked. Although five of his other designs were built—the Imperial Annex, the Jiyu Gakuen School, the Aisaku Hayashi House, the Arinobu Fukuhara House and the Tazaemon Yamamura House—only the school and Yamamura House survive fully intact. The Imperial Hotel’s front lobby was reconstructed at the Meiji Mura architectural park near Nagoya after the Imperial was razed in 1967, an event that Edward Seidensticker, author of the definitive history of Tokyo, called “one of the tragedies of postwar Japan.”

Through the years, researchers have occasionally suggested that there are Frank Lloyd Wright designs in Japan still unaccounted for, but leading Wright scholar Bruce Brooks Pfeiffer, Director of the Frank Lloyd Wright Archives at Taliesin West in Scottsdale, Arizona, believes that all the major designs have been identified.

Did the architect, whose prodigious output barely slowed even when clients were scarce, really design only a handful of buildings in the six years that he lived on and off in Japan? The country was his greatest inspiration, after all, and he had at his disposal a devoted staff of eager young Japanese draftsmen and craftsmen, whom he had proclaimed “the finest in the world.” For a creative genius who designed over 800 buildings in seventy years, a dozen or so in six seems incomprehensible. Have all the Wright designs in Japan really been identified? Surely there are others, perhaps even extant? One recent discovery demonstrates the difficulty of identifying further Wright designs, despite what seems to be irrefutable proof. In 2007, when The ASIJ’s archives were being organized for digitizing, an intriguing file turned up. Inside was a camera-ready copy on vellum, shrunk to fit a fundraising booklet entitled “The American School in Japan: An Investment in Americanism.” The booklet included a bird’s-eye view and a site plan, with the caption “Sketch of Plans for the American School in Japan, Frank Lloyd Wright, Architect.”

The same drawings were also reproduced with attribution to Wright in Trans-Pacific magazine in 1920; and they appeared again under Wright’s name in the school’s Annual Report for 1920-21, published in August 1920. The report contained a long article about the bi-national efforts to raise funds for the new school building. Despite all the VIPs involved in the school, which already had 150 students from the leading foreign families, and the fact that the fundraising was being aggressively conducted both in Japan and the US under the leadership of the Carnegies and the Rockefellers, the drive failed.

Also discovered in The ASIJ archives was a letter on Sale & Frazar Ltd. letterhead from a Mr. Hansen to Mr. RF Moss of Truscon Steel Co., which provided engineering support and supplied steel to most of the buildings in Japan, including the Imperial Hotel. Dated April 13, 1920, the letter discussed the design of a two-story school building to be located just opposite Tamachi Station in central Tokyo, and concluded: “Mr. Frazar [chair of The ASIJ Board] would like very much to be able to report on this proposition at the next meeting of the Board… Would you in co-operation with your friend Mr. Wright be able to do anything on this? Could you give an estimate, and perhaps have a better plan drawn up?”

At the time, RF Moss was on The ASIJ Board, and it is possible that he pressed Frank Lloyd Wright into doing drawings for the proposed school. Wright was still in Tokyo working on the Imperial Hotel in 1920, and it is unlikely that Moss or anyone else would have affixed the great architect’s name to drawings that were not his. But because original drawings have yet to be located, the Frank Lloyd Wright Foundation has declined to authorize the designs as Wright’s.

No other details have so far emerged regarding the fate of the designs, despite efforts to track down new leads. But there is another link between The ASIJ and Frank Lloyd Wright: new drawings were done for the school three years later, in 1923, by Antonin Raymond and a partner (these, too, went unrealized). Raymond, a naturalized American of Czech birth, and his French-born wife Noémi had accompanied Wright to Tokyo in 1919 to assist on the Imperial Hotel. They stayed on that project only a year, but lived in Japan for over forty years, developing an indigenous modernist architecture that owed much to Wright’s organic design principles. The Raymond office nurtured many leading lights, including Kunio Maekawa, Junzo Yoshimura, Junzo Sakakura (who would join forces in 1955 to build the International House of Japan) and George Nakashima, the famed furniture designer. Their fusion of Japanese traditional architecture with contemporary design, first pioneered by Frank Lloyd Wright, enriched Japan’s mid-century building boom and contributed greatly to the nation’s continued stature in the global architectural arena.

About the writer:
Filmmaker and Wright scholar Karen Severns is the writer-director of the acclaimed documentary Magnificent Obsession: Frank Lloyd Wright’s Buildings and Legacy in Japan. A co-founder of the nonprofit Wrightian Architectural Archives Japan, for which she organized building tours, seminars and special events from 2004-2008, she has spoken and written widely on Wright, architecture and historic preservation, and continues to lead unique architectural tours. Find out more at: www.kismetjapan.com