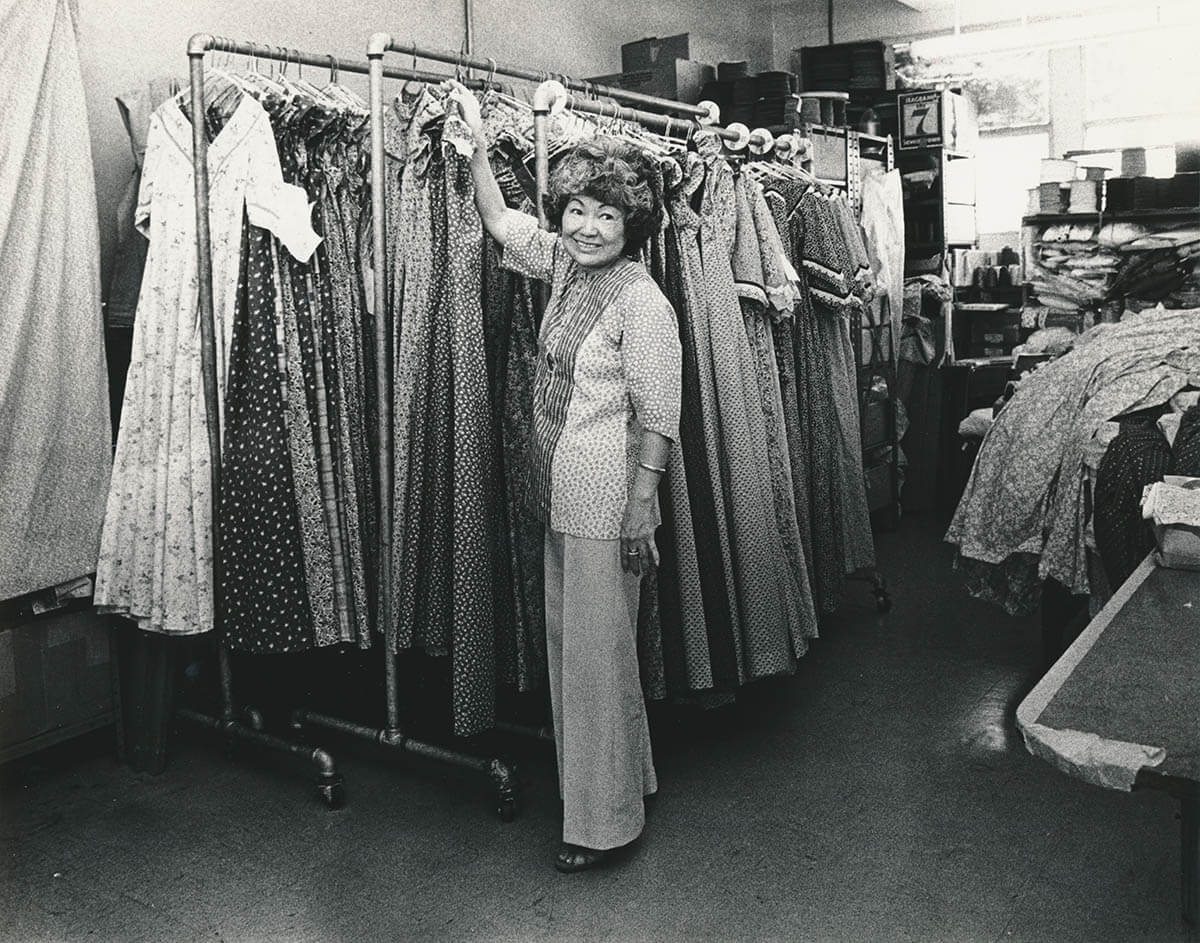 A Stitch in Time

When Elizabeth Manchester (neé Davison) ’24—that's class of 1924—began designing traditional Hawaiian mu'umu'u, she took her inspiration from her grandfather's night shirts. “Grandfather was staying with us and he had woken in the middle of the night.I got up and saw him standing there in his white nightshirt, with the long sleeves and the slit on the sides up to here,” she told the Honolulu Star-Bulletin. “Years later when I was thinking of my designs, I remembered him with his nightshirt.”

Manchester launched Bete Inc in 1959, changing her first name to the Hawaiian spelling when creating the brand.“I chose the Hawaiian spelling of my name, Bete, becauseI plan to do collections of Hawaii's favorite garment, the mu'umu'u!” she said at the time of the launch. Her take on the nightshirt-style kapuna became an enduring favorite and led to widespread recognition of her designs.

Born in Sendai on March 27, 1906,Betty Davison grew up in Japan where her parents and grandparents were both missionaries. Her grandfather was one of the first Methodist missionaries to enterJapan, arriving in Nagasaki ten years after the death of the last TokugawaShogun. When the family relocated, Betty attended Tokyo Grammar School—asASIJ was known at the time. The school had an enrollment of 77 students and was housed at No. 17 Tsukiji in the ForeignSettlement. Her father, Rev CharlesDavison, served on the school's faculty and was in charge of manual training and partnering with a local technical school the Furitsu Kogei Gakko.

Betty left Japan for the United States at the age of 11, first to the East Coast before the family settled in California. She began designing and sewing early in life as she couldn't stand the clothes her mother would make. “They were old looking for me, so I complained and was told that if I didn't like them I should make my own,” Betty told the Honolulu Star-Bulletin in 1970. As a result she would grab odd pieces of cloth every Friday at Bullocks remnant sale and sew them into clothes for herself and her sister.

She would go on to attend Occidental College in LosAngeles, where she majored in education and joined theDelta Delta Delta Sorority. On July 27, 1928, Betty marriedFrancis B Manchester, a Stanford graduate, in a ceremony officiated by her grandfather Dr J.C Davison. She had put her tailoring experience to work and wore a modified version of her mother's bridal gown with a cape constructed from lace from her grandmother's wedding dress. Betty would goon to parlay these skills into running a dress shop in LagunaBeach. Her interest in fashion ultimately endured longer than her marriage, which ended several years later.

Betty began a new chapter in her life and a new career in Hawaii starting out in 1941 working as a fashion buyer for several local companies before branching out on her own. At the time, very few holokus (traditional Hawaiian dresses) were being made and those that were available tended to be produced from rough, un-Hawaiian fabrics. Betty saw an opportunity and studied historical photos, conducted research at the Bishop Museum and then began designing her own mu'umu'u. With contacts in the fashion business already she gauged the reaction of the buyers she knew with a fashion show of daytime and evening designs.The buyers encouraged Betty to go forward with her plan and so she went full steam ahead, leaving almost immediately to goto Los Angeles to buy fabric. On her return, she rented a space in the Aloha Tower—furnishing it with tatami and Japanese furnishings—and set about creating her first collection.

Initially it was a cottage industry with Bete—as she was now known—cutting the garments herself before sending them out to women to sew at home. She would make her own labels and then deliver the finished mu'umu'u to stockists herself. Two years later she hired Rene Kubo as a cutter and Rene became her right-hand—years later ultimately taking over the company.The business steadily grew in scope and reputation and soon Bete’s name and designs were a fixture in the local press.

At the height of her popularity, a Bete mu'umu'u was a wardrobe essential for many women—both on and off the islands. Jackie Onassis preferred the black velveteen mu'umu'u with a scoop neck and leg of mutton sleeves she was gifted following a visit to Hawaii. Queen Elizabeth II was also a recipient of a Bete mu'umu'u following a stopover visit toHonolulu. Many of Hawaii’s Miss America contestants headed off to compete with one of their runway looks provided by Bete Inc. In 1980, Bete’s contribution to the local fashion industry was formally recognized and she was inducted into the Hawaiian Fashion Guild's Hall of Fame, having previously been honored with their Golden Hibiscus Award in 1966.

In her advanced years, Bete remained as sharp and good humored as ever although she stepped away from the day to day operations of the business and moved into a local nursing home. She passed away on April 7, 1984. Her business passed first to Rene Kubo and then to sisters Nola and Linda Nahulu who continue to maintain and honor the classic Bete mu'umu'u. The firm still operates as a family business in the spirit started by Bete and her fashion legacy continues over70 years after Bete designed her first “night shirt” mu'umu'u.