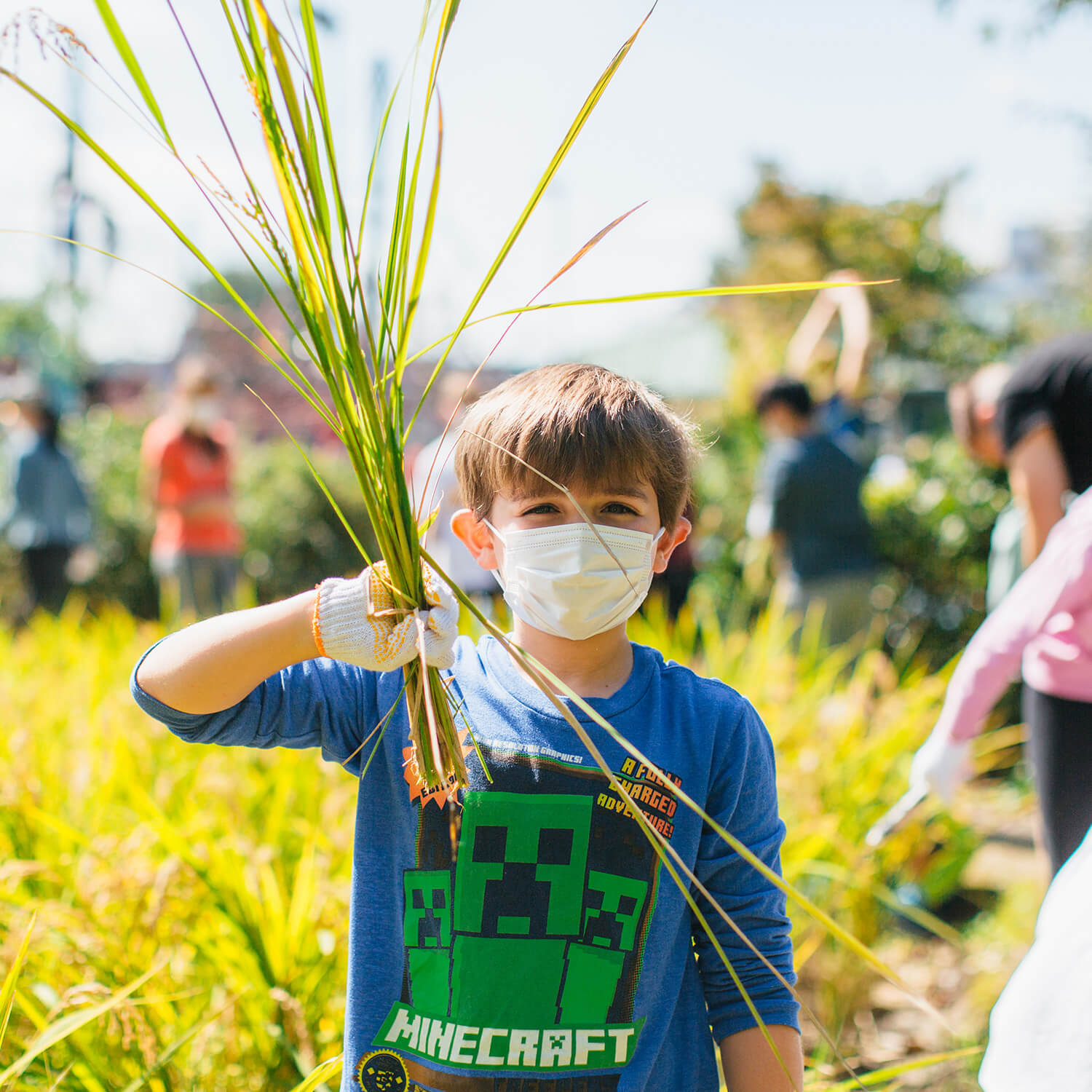 Bare toes squelch through mud and noises that range from signs of delight to disgust fill the air as fourth graders take their first steps into the newly flooded rice field on the edge of the Elementary School playground. It’s the start of a long-term project to grow, harvest and package rice on campus and the beginning of a learning partnership with local farmers.

Rice is often called the essence of culture in Japan. The foundation of myths and spiritual beliefs, celebrations and milestones in life, and the basis of many social practices and traits, rice and its cultivation are an integral part of the Japanese identity. Similarly, over the coming months the project will bring together many strands of the curriculum — from science and design tech to Japanese language and service — as well as students of different ages all brought together by the process of cultivating rice.

‍April – May: Before any planting could take place, the first step in creating a rice paddy on campus was preparing the field. After converting one of the existing garden plots by adding raised dirt walls, cultivating the earth and installing a water source, the field was flooded. The next step was for the fourth grade students to add rice bran fertilizer to the water. Students scattered the powder into the water, stomped their feet and used hoes to mix it with the soil.

May 25: After leaving the paddy field to rest for a few weeks it was time to begin planting the rice seedlings. Students followed the strings to try and make straight lines as they pushed the seedlings into the mud. The fourth graders planted most of the field but left two rows at the front for the Kindergarten classes to plant a different type of rice, mochigome, that is stickier and used to make mochi.

June 10: As the plants began to grow, students began to think about the implications of growing rice on campus. “We used this wonderful experience to practice our problem solving skills and some students were concerned that the rice paddy would attract mosquitoes,” fourth grade teacher Jen Wacha noted. The solution they came up with in consultation with the farmer was to add medaka fish to the field so that they would eat any mosquito larvae.

‍Aug – September: Observing the impact the fish had on their environment inspired students to build aquaponic systems in their classrooms to further test the effect the fish had. Comparing the growth of basil plants in systems with and without fish enabled students — now in fifth grade — to see first hand how the medaka contributed to an ecosystem. Some students were motivated to explore further and one fifth-grader, Henry, even went on to build aquaponic systems at home to grow lettuce for his pet rabbit.

September 14 – 21: Before beginning the rice harvest an important step was to drain the paddy and rescue the medaka. Students and adults alike were surprised to see how the fish had multiplied during the summer months. The completion of the growing cycle tied into the fifth grade science unit on Earth systems and the harvest itself saw students cut the rice into small bundles, tie them with hemp string, and then stack them on drying racks.

To celebrate the rice harvest, our second graders staged a matsuri which saw them carry mikoshi (portable shrines) they had designed and built on the theme of rice and school spirit. The activity tied together their units on community, the Japanese curriculum as well as design tech. Fourth grade taiko students joined the event to provide a musical accompaniment as the matsuri parade made its way through the Elementary School, central courtyard and CAD building.

October 5 & November 2: Once the rice had dried outdoors in the fall sun, students utilized a traditional piece of machinery powered by a foot treadle to thresh the rice, removing the grain from the stalks. They collected the rice and bagged it ready for the next stage which was peeling and polishing the rice. This involved passing the rice through two different machines to remove the outer husk and then polish the kernels. At the end of the process, students got their first glance at their final product — shiny, white grains of rice.

‍Late Fall: Once all the rice was collected, students were surprised to find that it was less than they had anticipated. They brainstormed how they could use the rice they’d grown to support Second Harvest, a local non-profit that tackles hunger in Japan. Working with design tech teacher Hardi Fichardt, a group of fifth graders met with high schoolers, who interviewed the elementary students to build an understanding as to what kind of label they needed for the rice bags. The high school students are taking these ideas and will go through the design cycle to produce the packaging for the rice. The fifth graders will then sell the bags of rice and will share with the community their knowledge about the work of

Thanks to the work of ASIJ’s Japan Center, students were guided through the rice growing process by local farmers Mr and Mrs Otsuji. Throughout the process, student translators assisted in explaining each step for their classmates, providing them with an authentic opportunity to use their language skills and new vocabulary.