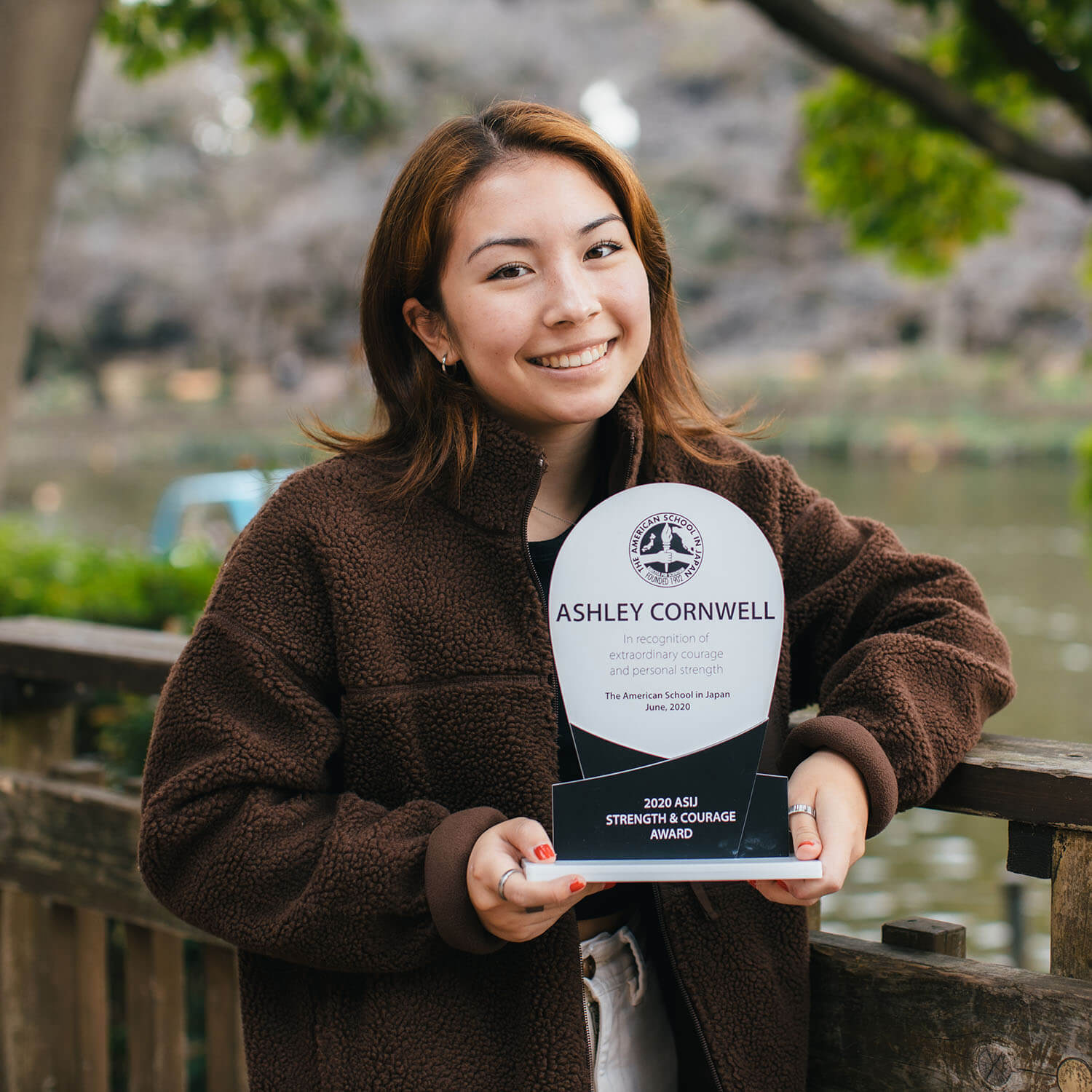 Ashley Cornwell ’20, the recipient of this year’s Strength and Courage Award, speaks to us about her service work and her reaction to receiving the award.

The fifth annual Strength and Courage Award was given to Ashley Cornwell ’20 in June of this year. The prize of ¥1 million (approximately $10,000) is presented annually to an ASIJ senior who has displayed courage and personal strength during their time at ASIJ. “I was honestly pretty surprised. I didn’t think I would receive such a high honored award let alone be nominated for something like that, considering how there are so many other people in my grade who really devote their time to service and helping others,” Ashley said reflecting on what it meant to receive the award.

Deserving students are nominated by faculty, counselors, and administrators at the end of the first semester, and invited to submit an essay describing the ways in which strength and courage played a role in their lives (and in a project or initiative they had led). Submissions are reviewed by the Child Protection Task Force composed of students, counselors, administrators, and members of the Board of Directors. Nominees are then interviewed by the task force, as part of the selection process. Those nominating Ashley mentioned her outstanding qualities saying “Ashley contributed nothing but positivity to our community here at school, becoming an outstanding academic but also a giving community member.”

Ashley began her ASIJ experience as a freshman when she relocated to Tokyo from San Diego. Making the transition to a new school, and life in Japan, Ashley decided to start volunteering at Hands on Tokyo, a service organization with “a mission to contribute to society, instill volunteerism, and develop leaders by providing a meaningful place for volunteer activities that meet the needs of the community in two languages.”

Over four years, her volunteer activities spanned a variety of settings including a welfare home for children, dance activities for autistic children, and visiting with the elderly at a senior center. Ashley explains how she came upon this particular form of service. “Part of the reason I actually joined Hands On Tokyo was to improve my Japanese. Having lived in the US before moving to ASIJ freshman year, my Japanese wasn’t the strongest and so I actually did it as a way to both volunteer and to improve my conversational Japanese. What I really liked about Hands On [Tokyo] in particular was that even if you are not the best at Japanese, people are willing to want to learn English and speak English with you and want to communicate. And so the language barrier wasn’t much of an issue.”

One of the most memorable activities Ashley experienced continues to motivate her today. A combined trip with Hands On Tokyo and ASIJ continues to motivate her commitment to service. “We went on a trip to the Tohoku region. We helped this local farmer with his crops and he was explaining to us how the tsunami had struck their town and so many people were missing and lost their lives. Hearing his story about that was kind of difficult to hear because it was so heartbreaking and then the next day we actually visited one of the schools that had collapsed due to the tsunami and earthquake and I think seeing that, I think it motivated me in a way to want to interact with people more because people go through so many hardships and you don’t really know about that. So I think that was a very big moment for me and made me proud to be part of an organization that really focuses on the community here in Japan.”
But Ashley’s motivation goes well beyond immersion in Japan, as she describes why she continues to be drawn to service experiences that are “very rewarding after you interact with these people for a couple of hours. And you get to learn about their experiences and their hardships. And then it is really rewarding knowing that you brought a smile to their face. And afterward, you just feel that helper’s high and that just makes you want to keep going back and encourages you to do more.” Ashley explains that the “helper’s high” was an impromptu phrase she first used in her interview for the Strength and Courage award with the Child Protection Task Force, but upon further research, she found it is an actual term to explain why volunteers are drawn to service activities and defined as the positive feeling experienced after completing an act of kindness.

Now, as a Northeastern University freshman, studying online for the first semester from Tokyo, Ashley continues to navigate the impact of COVID-19, which limited her volunteer work last spring in Tokyo. She seeks events with personal interaction, the aspect of volunteering that she highly values. “My original plan was to do something similar to Hands On [Tokyo] where I could interact with either children or senior citizens and visit them once a week. But because I am not on campus it is difficult finding opportunities where you can interact with people one-on-one because I prefer to interact with people rather than doing other types of service work. I just find it more meaningful when you get to talk to them and learn about their life.” Ashley says that by chance she stumbled upon an opportunity to teach English online through Northeastern and applied for the position, went through the interview process, and took a few courses they provided. “I just finished my first lesson a few hours ago, with a refugee,” she tells us. Adding that it was “very interesting to hear her experiences about wanting to move to the US for a better life for her children.”

When asked how service might factor into her future, Ashley shares that she plans to “keep with this tutoring service, and then when I go to Boston next semester probably find more opportunities to really meet with people. Hopefully, by then COVID will be better and so I can find more opportunities and try out different things to find out what I want to do.”

Her impromptu mention of a “helper’s high” as part of the interview for her award, actually captures Ashley’s path to service. Her deep desire to connect with others and uncover the less well-known challenges others face motivates her. Her future plans include “hopefully working for a non-profit or some sort of an organization that is centered around helping people.” We wish Ashely all the best as she continues to pursue further volunteer opportunities that reward her—and those she works with—in so many ways.