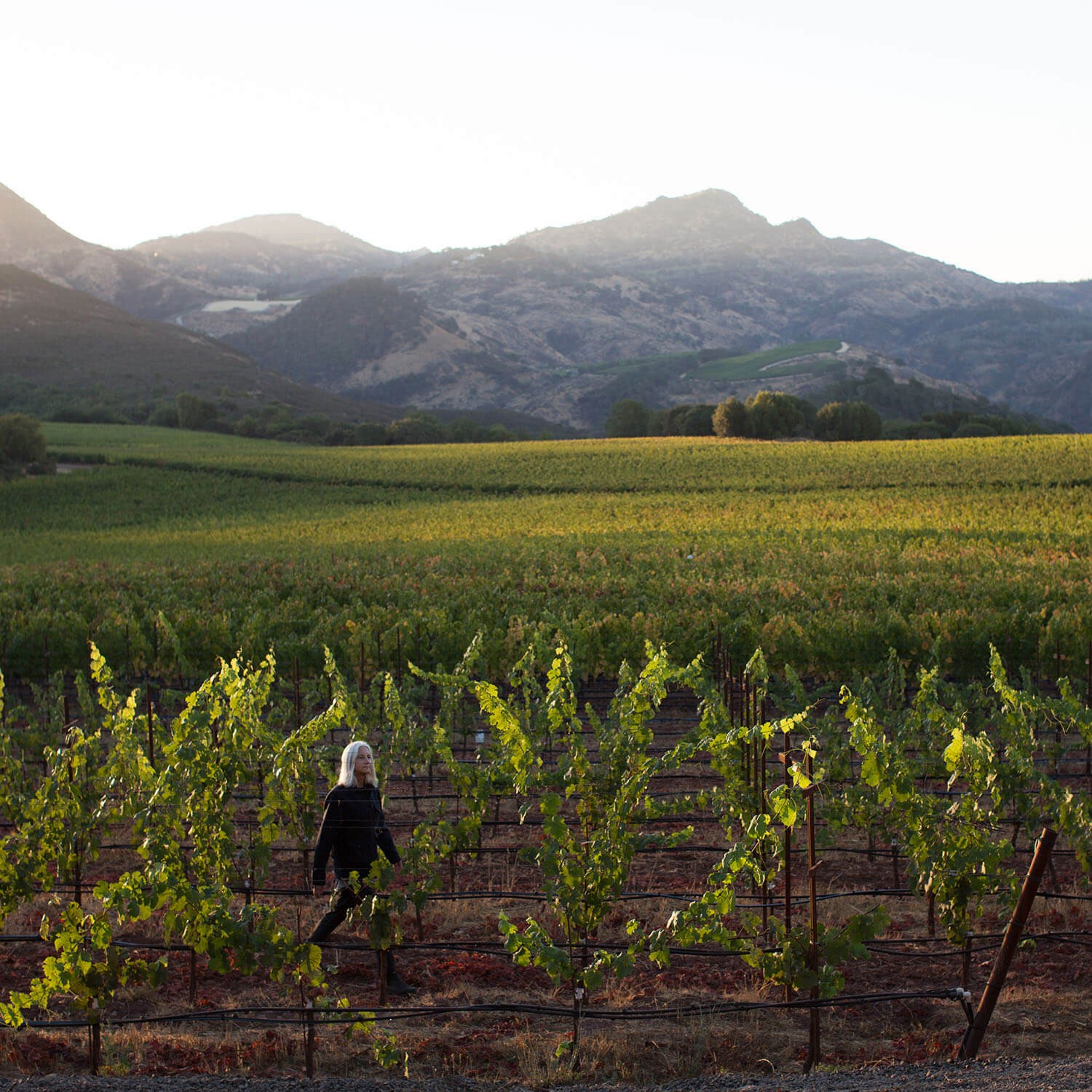 Veteran winemaker Rosemary Cakebread ’75 speaks to Claire Lonergan about her three-decade career in Napa Valley and her winery Gallica.

“If I were a wine, I would say probably Grenache—it’s one of my favorites. There’s just something about its structure and elegance...and it’s a little bit difficult.” Although she self- identifies as a Grenache, winemaker Rosemary Cakebread is better known in Napa Valley for her Cabernet Sauvignon. Now known for producing wines for her Gallica label, Cabernet Sauvignon first brought her recognition at Spottswoode Winery and Vineyard in the nine years she was head winemaker from 1997.

Spottswoode has deep roots in Napa and was founded in 1982 by the late Mary Novak who was part of the first wave of female winemakers in the region and one of the first women to run a wine estate in Napa Valley. Rosemary recalls Mary’s “abundant energy, gentle mentoring, sense of humor and sheer class” during her tenure at Spottswoode. Her time there saw her work with Mary and daughter Beth Novak Milliken, build today’s winery. “It had been part of a long-term goal to bring farming through bottling under our control, at our own pace. In addition to replanting acreage due to the phylloxera epidemic in the late 90s, we took on the building of a permanent home for the winery. Perhaps it was a last-ditch effort to get us out of Mary’s basement where we fermented Sauvignon Blanc, but nevertheless, I always thought it was brave to take on the risk given the youth of our small team,” she writes on the Spottswoode website, where she consulted on the winery’s 3,500 case production until 2012.

Rosemary’s interest in viticulture was fostered after she spent a summer working on the bottling line of a local winery. Having trouble keeping busy in the small town of Petaluma, California, friends introduced her to a local winemaking family. Rosemary claims it was “a little bit by accident in many ways” that she ended up parlaying that summer job at Sebastiani’s of Sonoma into a career. “Winemaking seemed like a very appealing career choice, the agricultural lifestyle suits me, and I was very intrigued,” she says.

That led Rosemary to enroll in the University of California Davis’ pioneering wine program, which was established in 1935 following the end of Prohibition. “I was in school with Heidi Barrett, Doug Shafer, Eileen Crane and Mary Maher,” Rosemary says, listing a number of now highly successful wine industry professionals, including her future husband Bruce Cakebread—more on their meet cute later. Rosemary, who made the Dean’s List her Sophomore year, went on to graduate with a bachelor of science degree in fermentation science in 1979 and it was the technical side of enology that she discovered a passion for.

“The theoretical aspects of winemaking are understandably taught in the university setting but the one thing that surprises many people is how important farming is. It’s not just the physical work of making wine, there is a huge agricultural component recognized everyday from practical farming to the weather,” she says. “It is this aspect of our business I am particularly attracted to. I really love growing things, having a garden, so it comes naturally to me,” she adds. That initial interest in the agricultural side of wine production was bolstered by her organic experience at Spottswoode, which gained its official organic certification in 1990, and has shaped the philosophy for her own winemaking. “I work with an organic vineyard, and our vineyard that we have for Gallica is certified organic so I’m really interested in that and I guess I’ve always been kind of a green thumb at heart,” she explains.

After graduation, Rosemary took her first cellar job in the historic Inglenook Winery, founded in 1879 by a Finnish sea captain, where she stayed for two years. There she did everything from working in their lab and at the sugar stack to learning about bottling and refining her understanding of fermentation. Trips to France, Italy and Germany to learn about wine along with visiting coopers expanded her understanding of barrel making. Her time at Inglenook also introduced Rosemary to Cabernet Sauvignon, which today is one of her signature wines and something she “knows she loves making.”

A further pivotal experience came with Rosemary’s move to G.H. Mumm. The renowned Champagne house had begun its Californian venture in 1976 when Guy Devaux was sent by G.H. Mumm to search for the ideal wine making area for growing traditional Champagne grapes in the United States. Devaux went on to found Mumm Napa and produce the first vintage bottled under the name Domaine Mumm in 1983. Rosemary joined the start up—part of the first wave of Champagne houses such as Moët & Chandon and Louis Roederer exploring the possibility of growing in California —and spent seven years at Mumm learning the intricacies of sparkling wine. “Blending is really important in sparkling wine and Champagne production because you’re taking lots and lots of different wines and you’re blending them for one cuvée that eventually is bottled,” Rosemary says.

The art of blending and the science behind aromatics is what Rosemary finds most exciting about winemaking and the name of her own wine, Gallica, is a product of that. Rosemary considers herself “a student of aromatics” and shared that learning about the different aromatics that go into the compounds to make perfume has informed her winemaking. “Gallica is a botanical name for a species of rose—old roses that are used for perfume production,” she says.

In addition to the unique botanical name, Gallica wine has a distinct ink print label which is a nod to Rosemary’s time in Japan. When it came to designing the label, Rosemary says it was a natural process. Having long been a fan of Crown Point Press in San Francisco, she had the opportunity to observe some of the printing done by Kathan Brown. In 1982, Brown founded a reciprocal woodblock program with Japanese master printer Tadashi Toda along with several American artists. It was there that Rosemary fell in love with Japanese technique and its influence on contemporary artwork. Rosemary says, “I knew about the early Japanese master printers such as Hokusai and Yoshida.” She now admires Yayoi Kusama’s famous pumpkin series and says that her appreciation for the “bold yet watercolor feel” came from a combination of Japanese culture and the Crown Point portfolio.

Originally from California, Rosemary’s family relocated to Japan for four years in the late 1960s for her father’s job. A pilot for World Airways, he flew medical and military supplies from Japan to Vietnam during the Vietnam War. While in Japan, Rosemary attended ASIJ for what was then junior high where she was a student from grades five through eight. While her time in Japan may have been relatively short, Rosemary shared that she truly made “life friends” at ASIJ which is one of the things that stands out to her about her experience—that and “the ice cream!” Her former classmate Keiko Rhan ‘75 remembers her as “shy but quite witty” and shared that she and Robin Easton ‘75 took a trip to Gallica to visit Rosemary and taste her wines.

Like many alumni, Rosemary shared that her time in Japan was really a special part of her childhood and she has “amazingly fond memories of ASIJ and it was really life-changing.” She went on to share that it’s a “wonderful opportunity especially as a kid, to transplant yourself completely to a new culture and experience a country that is vastly different from the United States—I loved every moment of it.” Rosemary’s connection to Japanese culture is still very much a part of who she is today and she has a great appreciation for Japanese food and art. Her small collection of Japanese ceramics includes work from Makiko Hattori, Chieko Katsumata and Akira Satake.

These days, Rosemary and her husband Bruce “live in St Helena and have a tiny Cabernet Sauvignon vineyard we planted 25 years ago.” Although they were at UC Davis at the same time, it wasn’t until after graduation that a chance encounter brought them together. “I met Bruce at the Oakville Grocery store, a local high-end sandwich store in Oakville, standing in line buying a sandwich,” she recalls. That avocado sandwich (no cream cheese) led to marriage, two children—neither in the wine industry— and Rosemary joining the Cakebread family. Founded in 1973 by Bruce’s parents, Cakebread Cellars is now a fixture of the Napa scene and Bruce was responsible for all winemaking duties and vineyard operations from 1979 until 2002 when he became president and COO, a position he stepped down from this October. Despite the fact they both run different wine labels, Rosemary shares that there is no rivalry between her and Bruce. “We are each other’s biggest fans probably, but our situation is not completely unique believe it or not,” she says. “I know several winemakers married to one another.”

With a long and varied career, Rosemary’s future plans include continuing to make exciting wines, to keep learning and exploring unique varietals, contributing to her local Napa Valley community and spending time with new granddaughter Emma. One thing she does admit is that she has yet to try Japanese wine. “I’m familiar with Japanese beer and to some extent sake, but I’m not really familiar with Japanese wine,” Rosemary says. “I had the opportunity to visit Grace Vineyards in Shanxi, China about five years ago with a group from Napa Valley. It was so dramatically different and fascinating. I would enjoy the opportunity to visit some of Japan’s vineyards and hope to do so in the near future.” That opportunity may come soon, as Rosemary says, “I think I’m going to be in Japan this year. I’m not sure exactly when. I have a distributor in Japan and we are working on a date in 2019.”