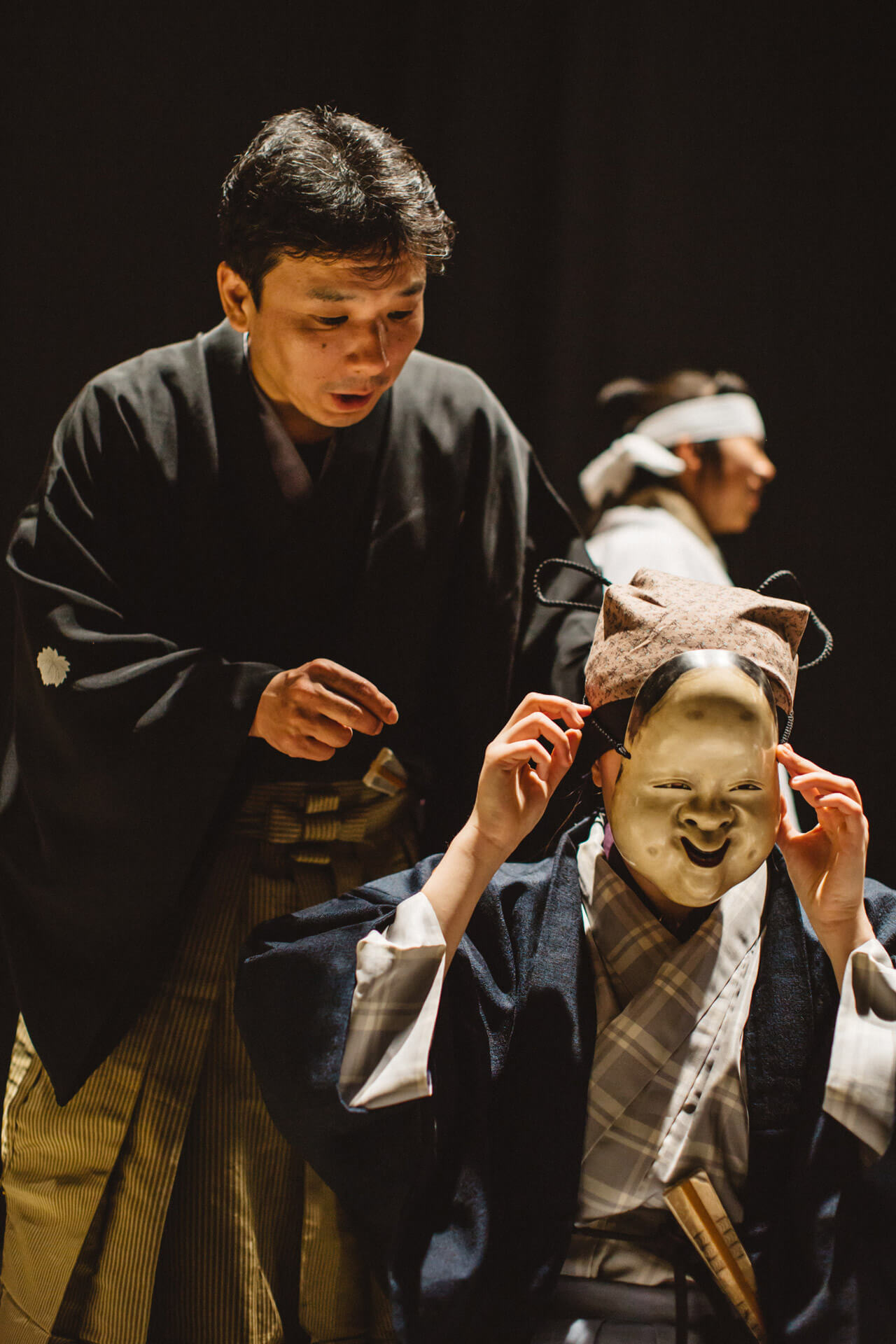 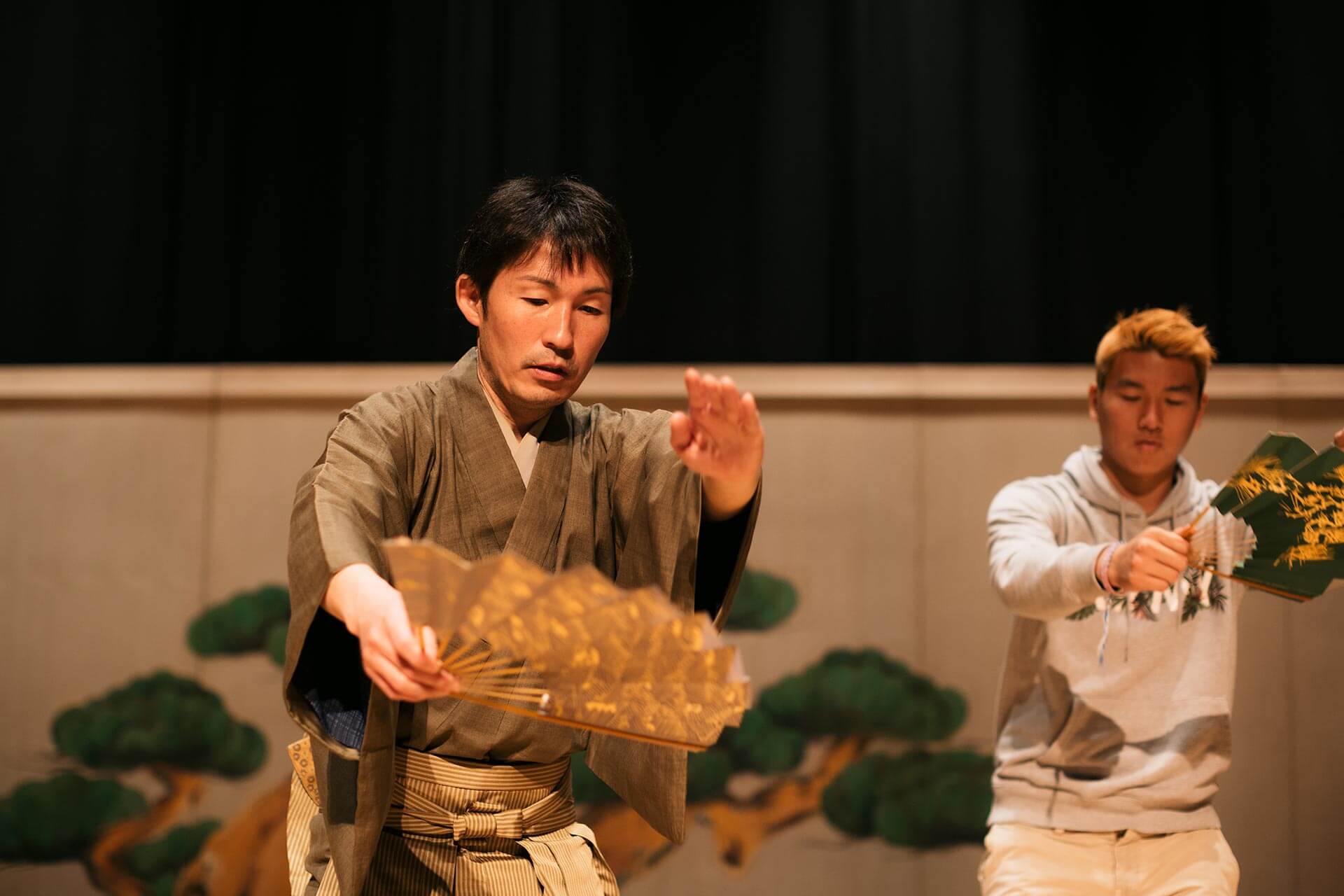 Two brothers, masters of kyogen, sit stage-side in the ASIJ Theater. Yasutaro Yamamoto and his younger brother Noritaka Yamamoto have trained in kyogen since they were toddlers—the fifth generation of their family to uphold the ancient artform.

Dressed in the traditional montsuki, a formal kimono bearing their family crest, the two wait for students to arrive for after-school kyogen club practice, continuing a unique co-curricular collaboration that began with their father and an ASIJ teacher four decades ago. Kyogen, which translates to “mad words” or “wild speech,” is a traditional form of Japanese comedic theater. Nearly seven centuries old, it originated as an earthy, comical interlude between acts of the more refined and ethereal noh theater. Addressing concepts of gullibility, jealousy, laziness, and resentment, kyogen comedies poke light-hearted fun at universal human foibles. The content is heavily satirical, often incorporating elements of slapstick humor alongside highly exaggerated movements and dialogue spoken by unmasked performers, an evident contrast to noh.

The brothers have been visiting ASIJ since they were young boys. Their father Noritada Yamamoto, taught the first generations of ASIJ kyogen performers in the 1970s. Don Berger, a former ASIJ music teacher began the kyogen program in 1977 at the behest of several students, their interest sparked after a social studies trip to see a performance at the National Theater in Sendagaya. Eager to get the program off the ground, Don’s search for a respected and knowledgeable kyogen instructor was the inception of the school’s relationship with the Yamamoto family.

Over forty years later the collaboration continues. The significance of this opportunity for ASIJ students is difficult to overstate, as former kyogen club president Gary Yamada ‘00 outlined in a special video for the 40th anniversary performance, “20 years ago I first performed in kyogen...even back then ASIJ was one of only about a half dozen schools in the country to have a kyogen club and I’d imagine that’s still the case today. It’s something special, unique and amazing and I’m really glad that it’s continued.”

Students begin to file into the theater for rehearsal—with opening night only a week away, practice has increased to an every-evening affair. During rehearsal, the Yamamoto family practitioners help actors refine their spoken Japanese. Program advisors work with performers to be sure they understand the play’s old-style dialogue and are able to read its archaic kanji. Student translators are also hard at work studying the niceties of antiquated language in the script and delicately traversing the challenges in conveying humor and comedic timing. Their completed English translation will be projected on stage during the production. “Kyogen is an opportunity for ASIJ students to create a life-long memory. It’s a national treasure, so it is an honor to give these students such a deep experience—something they cannot have outside of Japan,” the Yamamoto brothers say.

Although students’ inspirations for joining kyogen may vary wildly from “I was curious and joined on a whim” to “I was attracted by the beautiful costumes,” all share the same sentiment after their first performance, “Being in kyogen was no longer about wearing beautiful kimonos, but a way to connect Japanese culture with the world.” Each ends with a resounding wish, that there are another four decades of performances ahead, for students to connect to Japanese culture, to each other, and for audiences to get lost in the pine tree panels and the magical world of traditional Japanese theater.