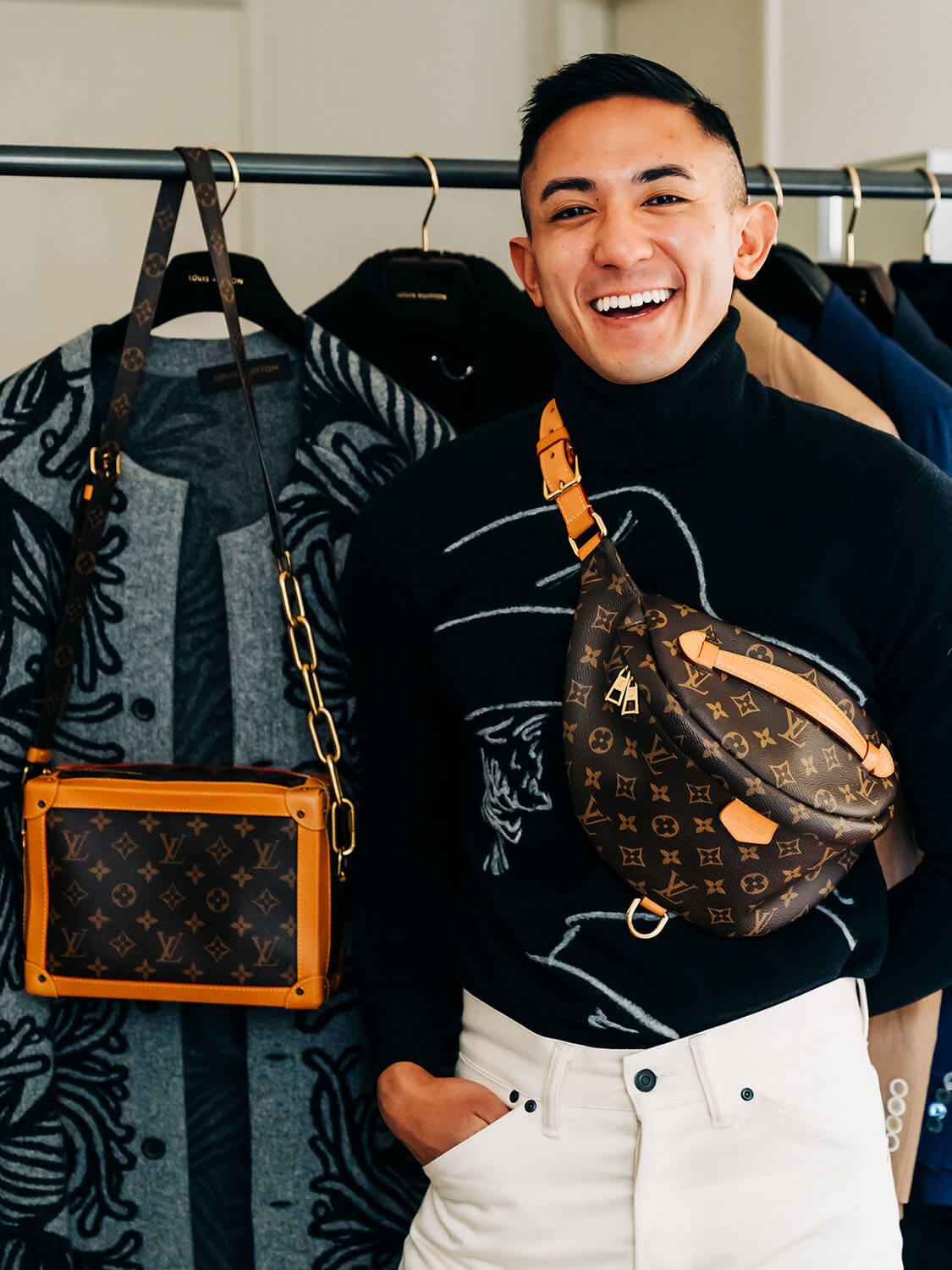 Men’s PR Manager for Louis Vuitton Chris Legaspi ’08, speaks with Claire Lonergan about his career and work at Vanity Fair.

It was a gray, chilly January afternoon in New York City when Chris Legaspi ’08 met us in a quaint little macaron shop in Midtown. His friendly face and radiant smile brighten up the gloomiest of mid-winter afternoons. The fashion industry often has the reputation of being full of cut-throat fashionistas— certainly that’s the impression films like The September Issue and The Devil Wears Prada have given—and so we were relieved to find Chris is a far cry from the stereotype. Being shy and humble, certainly hasn't held Chris back and he rose quickly through the ranks of New York’s fashion media before jumping across the runway to work for Louis Vuitton.

Chris is someone who instantly makes you feel like you’ve known them for years, despite self-identifying as an introvert— surprising as he attributes so much of his professional success to relationships. “My first boss is still my mentor today,” Chris says of his manager during his first internship at Details magazine in the summer of 2011. “We keep in touch all of the time and he has helped me along every step of the way. He helped me get my job at Vanity Fair later down the road and I will say I owe my career to him.”

A major in media and society at Hobart College at the time, Chris wasn’t really into fashion, beyond having fun dressing up. The summer before his senior year of college, he knew he wanted to do an internship in the city, but “I really didn’t know what I wanted to do.” The internship at Details, owned at the time by Condé Nast, opened his eyes to a new world. "It was like the best time. I had the best summer. I loved it.”

After graduating from Hobart, Chris returned to Details as a fashion assistant. Like many starting out in the industry he found that while his “permalancer” position was paid, it came without benefits, so it was certainly not easy. “There was a lot of coercing of my parents to let me do what I wanted, but I wouldn’t say they were unsupportive, I would say they were just very cautious which I think is very normal,” he says. “My parents are very big believers of ‘do what you love and the money will follow.’ But it was hard taking that job and not getting benefits and saying I swear it will be worth it.” Chris ended up working for the magazine for about a year and half before leaving for a short foray into PR at an agency.

Fashion media wasn’t ready to let Chris go just yet and within weeks he got a phone call from GQ, another Condé Nast title. “They had an opening and I was like I’m going back,” says Chris, who joined the magazine as a sittings assistant. That meant he was “on every photo shoot, run through and fitting that we did at GQ” working closely alongside the magazine’s creative director. “It was amazing to meet all of these people, and do what I did and get to travel. It was men’s fashion—Like the mecca of it.”

After 18 months of working for GQ, which Chris claims “felt like 10 years of my life,” another major opportunity appeared. Chris’s mentor put him in touch with a good friend of his who was a men’s director at Vanity Fair. The friend was looking for an assistant. The position was freelance, which made it a risky move for Chris who was full-time at GQ. The gamble ultimately paid off and Chris was soon promoted. “It was nice to be making my transition to more of an editor role. I was there for over a year and then my boss left. Instead of hiring someone above me, they decided to promote me, which was amazing. So I got the title of Menswear Editor at Vanity Fair.” The promotion made Chris responsible for all of the products used in photo shoots featuring male talent and for the men’s market pages. “I got to travel to all of the fashion weeks,” he says. “And I think then I really got to put my name out there and make a career out of all of this.”

Working closely with the magazine’s Creative Director, Chris helped to take concepts from sketches on a page to the finished page in the magazine–or even the cover. That included working on some of Vanity Fair’s iconic Hollywood covers shot by renowned photographer Annie Leibowitz. Her 2018 Hollywood cover—the shoot for which Chris participated in—featured a who’s-who lineup of Tinseltown’s stars that included Oprah Winfrey, Robert De Niro, Nicole Kidman, Tom Hanks and Reese Witherspoon. “We would prep anywhere from a week to just about a month for her shoots. Every single thing was thought out, down to the furniture used in the shot and candles that were lit for talent in the studios.” As part of the fashion team, “we would call in the best clothing from around the world, and from the best designers and we would show up with sometimes over 100 trunks worth of clothing,” Chris says. “The set up would include racks and racks of wardrobe and more shoes you could even think of.” The photo shoots themselves were equally extensive and could sometimes last about a week or more depending on the preparation, lighting, and location with shoots often partly done in LA and partly in NY. “The outcome was always beautiful and expressed that old Hollywood elegance that Vanity Fair stood for,” Chris comments.

Another standout moment for Chris from his time at the magazine was getting to go to the legendary Vanity Fair Oscar party. “I actually assisted with doing their Twitter. They do a red carpet live stream and I was up there with Karamo Brown from Queer Eye and Catt Sadler [from E! News], so the three of us talking fashion was pretty amazing. It was one of those moments! Miley Cyrus was in the background—it was amazing.”

One of the magazines most talked about covers in recent years featuring Caitlyn Jenner was kept a secret even from Chris as “only about four people at the magazine were in the know about that one,” he says. “We were all told that we were shooting a different woman who was the same size so no one would think otherwise. Most of us only found out the day that the cover was released online. I actually remember one of my friends sending me the link to the images before I even saw it.”

Despite Chris’s ambitious work ethic, he shared that his path has not been without its challenges. “A lot of blood sweat and tears went into it for sure,” he shares. He explained the biggest difficulty is “the ever changing landscape of publishing. Publishing companies are dealing with all of these changes, the merging of brands, and all of that. I think it has been really challenging to kind of maneuver through that. It’s not like it was back in the 90s.” Chris, who started out in the industry in 2011 feels that he "came in at a pretty turbulent time.” Details, where he got his start as an intern is no longer around.

In July of 2019, Chris left Vanity Fair and the publishing world to take on new challenges at mega-brand Louis Vuitton. When asked about the move, Chris explains that he had “been looking but not actively, just trying to see what was out there.” And, as is often the case, when he had decided to give up for a bit to enjoy summer, he was actually approached by the brand. Louis Vuitton “had been missing a Men’s PR team in the New York Office and I think they were very interested in me because I was coming from the editorial side.” Chris explains that gave him a different perspective on the industry. Just over six months into the new gig when we talk, Chris cheerfully shares “it’s going great. We are always very busy—there is never a shortage of news at Louis Vuitton.”

Of course since we met Chris back in January the business world, New York City and the planet have changed significantly. “The current climate has definitely affected the fashion and retail landscape and we are all trying to find our footing. I do not think that it will go back to the way it was, but what that new world is, I am not sure at the moment,” Chris says. “With all of our retail stores closed at the moment, we are putting a big emphasis on our online retail business. We started to feel the effects of Coronavirus during the previous Women’s fashion show in March. A lot of editors were called back to the US before our show, which happens to be the last show in Paris

during Fashion Week. We had a lower attendance than usual because of that and I think that it will make brands rethink their fashion shows going forwards.”

In early March 2020, Louis Vuitton’s artistic director, Virgil Abloh released a collaboration with Japanese fashion designer Nigo, who is most known for creating the urban clothing line A Bathing Ape. Mega-brands like Louis Vuitton are known to play a major role in setting fashion trends globally. Chris explains that the vision of people like Abloh influences many up and coming designers “may not be a direct reference citing the shape or colors, but the arc of menswear as a whole.” When Abloh first began, he brought streetwear to Louis Vuitton and into the luxury sector like it had never been seen before. “Streetwear then blew up on the men’s scene and with his latest show for Fall-Winter 2020, he has gone back to men’s tailoring” Chris notes. “Men are beginning to dress up again and with that brands are following. This will be a big trend starting in the Fall and will trickle down from major brands down to fast fashion brands.”

Chris’s own style he admits “is a bit of everything, actually.” He certainly has a personal style and whether he is in a precisely tailored suit or trendy streetwear, he always looks incredibly put together. He explains “I love suiting just as much as I love a good hoodie. A few of my favorite designers are Haider Ackermann for Berluti, Kim Jones for Louis Vuitton, Ralph Lauren, Brunello Cucinelli, Massimo Alba, Alexander McQueen, Boglioli, and Dries Van Noten to name a few.”

Born in the United States, Chris moved to Tokyo with his family at the age of 7. He attended ASIJ from Elementary School until graduation in 2008. Chris confesses “I was not so great academically. I will be honest I never took an AP class. My siblings were all the exact opposite; they took all APs.” Although he admits “if I could I would go back and probably try harder, but I am here with what I did and how I did it so I wouldn’t change that.”

Even though Chris may not have made the honor roll, he credits a lot of who he is to his time in Japan and encourages current students “to take in the culture and the surroundings as much as possible.” He opened up about Japan and shared, “I think that it has helped me and my work ethic and just in life more than anything else. And it’s weird but people and bosses will always be like the way you work, or there’s something about the way I present myself and I think honestly I attribute that to growing up in Japan.” His attitude is “always stay humble, work hard.”